Well, getting back into clean eating mode has proven a little more difficult than I expected. Mostly because it’s freaking freezing outside and who wants to eat a cold salad when there’s a windchill of negative 10? Someone, maybe, but not me. Soup is a great alternative, but eating it every single day gets old real quick.

So the trick, which I am far from mastering, is eating clean, energy dense foods that are still warm and satisfying. Mac and Cheese only satisfies one of these goals it turns out. I’ve had a couple of successes though.

My greatest accomplishment so far this winter is definitely a Banana-Berry Baked Oatmeal, which has received rave reviews and requests for more. I’ve made it twice.

END_OF_DOCUMENT_TOKEN_TO_BE_REPLACED

So, I’m a terrible baker. I mean, it’s probably for the best, because if I loved baking I’d be in real trouble. But you know, it’s the holiday season and I’ve been in this weird domestic mood lately. So I’m baking.

I have big plans for my baked goods. I am not that much of a dessert person, I enjoy it but it’s not the highlight of a meal for me or anything. But I love cake balls. Maybe it’s the intrigue. Maybe it’s the adorable packaging. Maybe it’s that they are virtually the only interesting thing I know how to bake…and they come from a box but don’t seem like they come from a box. So I have all these plans for cake balls, and maybe some chocolate chip cookies, and all these plans are making me exceedingly guilty. Carbs and I seem to have rekindled our love affair in the worst way, but like any abusive relationship, I know this is just a honeymoon phase until the next time I weigh myself.

To counteract…or maybe mitigate is a better word…all this completely indulgent baking, I decided to try something healthy as well.

END_OF_DOCUMENT_TOKEN_TO_BE_REPLACED

Ahh the elusive day off. Is there anything in the world better than a day of no earthly responsibilities after a too-long work bender? After working 11 straight days, including about 35 hours just this past weekend, I had huge aspirations for my day off. I was going to stay in bed at least until the p.m. hours, and then watch 8 to 10 hours of TV on DVD. Sadly, my body was not really into that idea and I woke up at 9, feeling like I had an overwork hangover.

I stayed in bed a little longer, checking social media, election polls, online gossip magazines–basically the entire Internet, but really, lounging in bed until mid-afternoon just was not as appealing in practice as it was in my head. Not to mention I was starving. So, I got up to scavenge the kitchen for food, which was a little tricky because groceries were pretty sparse.

The best thing about taking a day of rest and actually planning on wasting the whole day is that if a project ends up being way longer than I want it to, who cares? I’m just getting a little behind in my schedule of nothing. Oh man, breakfast took an hour to make? That only gives me two hours to sit around listening to music and playing Spider Solitaire until I need to start marathoning tv shows instead. It’s gonna be tight, but I think I can still squeeze everything in!

So I was looking through the fridge, determined to find something satisfying that wouldn’t require leaving the house. Also, since it was my day off I wanted something kind of extravagant. We’re not talking eggs benedict or a full Irish breakfast, but just something more satisfying than a glass of grapefruit juice and a banana.

During the fridge hunt, I found several fruits and vegetables that are, to me, more later day foods. Why is it we’re programmed to associate certain foods with certain times a day? If an apple is too heavy for breakfast why would anyone ever want a pancake?

The only “breakfast fruit” I found were some blueberries that needed to be used asap. They looked like they must’ve been on their last good, mold-free day. But since I wanted something more than raw fruit, I reserved the blueberries and took to the pantry. I found a box of steel cut oats, which I had tried in something else a couple months ago. I remembered liking them the other time I tried them, but I didn’t remember anything else about them.

So to jog my memory, I read the box, which informed me the best method for making steel cut oats is to make a porridge!

Seriously, I thought porridge was not a real food but just something they talk about eating in little kids’ stories. Next you’re going to tell me that curds & whey is a real thing too.

Without even knowing really how it would turn out, I felt like porridge was exactly what I was looking for. Something warm and bold and vaguely rustic. The perfect thing for a cool autumnal day where you refuse to wash your hair and intend to stay under a blanket forever.

To be honest, I’m still not positive this was actually “porridge” or if there is a difference between porridge and steel cut oatmeal, but whatever it was, it was delicious.*

*Okay so based on a Google images search I might have overcooked this, but my instructions are for legit porridge. Promise! 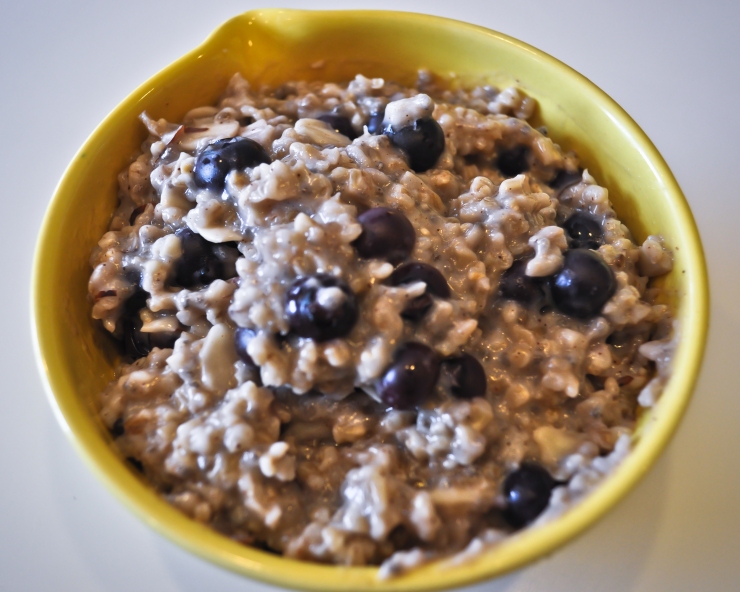 In a medium saucepan, add water & milk and bring to boil. NOTE: I recommend doing this on the notch below high heat because I learned the hard way that almond milk is a very um, needy boiler.
While the liquid is coming to boil, combine honey, vanilla, cinnamon, nutmeg and stevia, stir until the spices are blended in, and set aside.
Once the milk and water are boiling, add the oats and almonds. Continue boiling the oats (and almonds) until they don’t look like little pebbles and start to look more fluffy. Expect this to take about 10-15 minutes. Stir frequently while this is happening to avoid a) the oats sticking to the bottom of the pot and b) the liquid running over.
Once the oats seem thicker and softer, add in the blueberries and sweetening mixture. I poured the blueberries into the pot in a big lump and then poured the sweetener directly on top of them before mixing everything in with the oats. 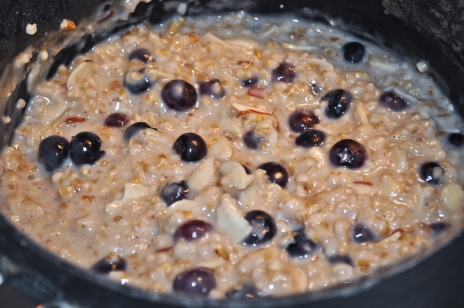 Turn the heat down to low, and let everything simmer 25-30 minutes, or until most of the liquid has evaporated. At about the 20 minute mark of simmering, stir in the chia seeds. Make sure to mix until they are evenly distributed.
Now that I’m thinking about it, and writing this all out, it’s really a matter of preference how liquid-y you want your porridge to be. I let mine simmer for a full half hour, but next time I will probably take it off the burner five minutes earlier so it’s creamier. Then again, it was super tasty the way I made it so maybe it doesn’t matter that much. Just don’t forget to keep stirring regularly.

Feel free to add some honey, syrup or brown sugar to it once you’ve served it. I totally did (1 teaspoon honey). 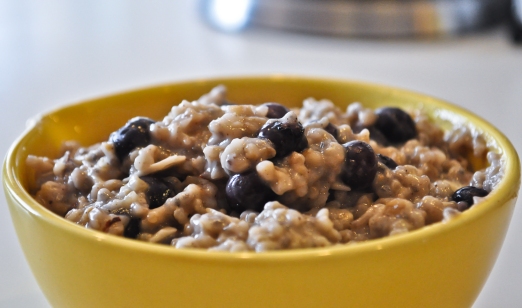 I really enjoyed this porridge. Hot cereal with fruit has become one of my favorite brunch-hour items. I’ve read reviews where people don’t like steel cut oats because they are too hard or chewy. I think for a lot of people it’s one of those things where they eat them because they are trendy amongst the healthy-eating crowd. But I liked them a lot. I think this slow boil-to-simmer technique (and using milk instead of just water) really helped soften them up. I like that they are a more substantive food than regular oatmeal. A little tiny bit of chewing never hurt anyone. Unless you’re being eaten by a predator, I guess. Back to the recipe, adding the vanilla really brought out both the almond and the blueberry flavor.

Plus, it is really very clean and diet-friendly. The whole thing is about 290 calories, with 9 grams of fiber and 10 grams of protein (for about 3/4 of a cup after it’s finished). All the protein and fiber make it very satisfying. (Other than a banana it was the only thing I ate until dinner.) It helps that it is very flavorful so it was a nice thing to take my time with. Like I said, it’s perfect for a lazy, leisurely day off kind of day.

It’s nice too that even though it takes a while, it also takes very little effort. I am definitely going to keep this one around for later occasions. 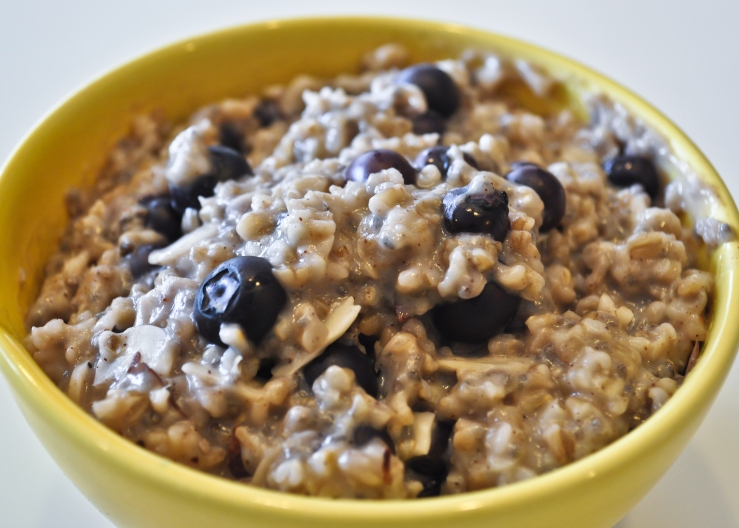