Well, I’m sick. It never fails, every year I deal with minor seasonal allergies on and off throughout the fall and then boom, Thanksgiving gets here and I get bronchitis or pneumonia or the plague (or whatever). Hopefully this year it won’t be that bad. Usually in the past I’ve been travelling for Thanksgiving, or I was busy with school, or both, so I always blamed my annual illness on stress. This year I’m not in school or travelling, so I’m really hoping it doesn’t get any worse. So far, I’m not so sick that I can’t function, but I’m still sick enough that all I really want in life is a big bowl of soup and my mommy.

Luckily, two nights ago I made a really great Lentil Curry Soup, which turned out to be even better this afternoon when I reheated it. I think my body predicted this illness and so it encouraged my brain to make a huge batch of soup ahead of time. That’s totally plausible, right?

END_OF_DOCUMENT_TOKEN_TO_BE_REPLACED

I hate cold weather. Especially when it is cold and gray. So every year I dread midwestern winters, where the sun hibernates from November to March. Even with the excitement of the holidays, I can’t help the sense of impending doom when I can’t walk around the house barefoot anymore and I have to get out an extra blanket for my bed.

Last week it was 80 degrees and sunny, which was beautiful and refreshing at the time, but now that it’s back to 50 and cloudy the nice weather seems more like a tease, and the cold gray weather feels somehow worse. Of course, it could also have something to do with the fact that I’ve had a minor sinus infection for like two weeks, which I also blame on the cooler weather. I will say I am lucky at least that I’m not living in the middle of a superstorm, and my sincere condolences (and apologies for being a sissy) to anyone who is.

The point of all this mid-autumn whining is that last night I needed some comfort food. Something warm and delicious and soothing. We have a couple of family recipes for soup, but nothing I was really in the mood for. Lately, I am perpetually hungry for Mexican food. We also have a great family recipe for tacos, which I frankly cannot believe I haven’t posted before. That sounded good, but again, I really wanted soup! Tacos are more of a summery food to me. So I thought about how I could compromise, and I thought of a nice, creamy tortilla soup. Since I had never made it before, I did what I always do and took to the Internet.

I based my recipe off of the chicken tortilla soup by the Pioneer Woman but I made some changes to make it a little healthier and a little cleaner. (Although the original recipe is pretty healthy in its own right.) Mostly I just added some vegetables and cut some sodium. I also added Greek Yogurt (surprise, surprise) to give it some creaminess.

This soup is fantastic. It is the ultimate diet food success: it is super healthy but doesn’t taste like it. It is low fat, low sodium and low carb, which is quite an accomplishment for such a hearty soup. Altogether a one and a half cup serving has 350 calories, but considering how much goes into it, I think that’s pretty light. It is definitely a meal all on its own. I also avoided using any processed foods, and stuck with (almost) all fresh ingredients instead, so I could keep it clean. Especially considering how good it tastes, I would say it is a diet-friendly success.

Taco Chicken (This is specifically modified for the soup. It’s basically halved from my normal recipe, and usually I use diced chicken instead of shredded, so no broth in that one.)

Directions for Chicken: In a medium saucepan, bring broth and chicken breasts to rapid boil. Cover, reduce heat to low, and let simmer for 10 minutes or until chicken is cooked enough to shred. Drain the broth. With a fork, pull on the chicken breasts until it comes apart into shreds. It should be broken apart enough to work as little pieces in the soup.

In a saute pan, heat oil on medium-high heat. Add the chicken, followed by the spices. Stir until the chicken appears covered in the spices, then add the water. Let simmer just a few minutes (maybe 3) then add the cornstarch. Stir well, so chicken is evenly coated in the liquid. Let simmer another 5 minutes or until the water evaporates enough so it is a more sauce-like consistency. But make sure not to let the chicken overcook. It should not be in the saute pan more than 10 minutes total.

*Garnish with avocado, cheese or whatever else you fancy. Or garnish with nothing at all! I will say the avocado was a fantastic addition because it cut a little of the spiciness and add some extra creaminess, so I highly recommend sticking with that.

I really loved this soup. I am very excited about how well it turned out because there are a lot of cold months ahead before the warm ones come back to me, and I think this recipe will really come in handy. I know it looks a little daunting with the number of ingredients and steps in the recipe instructions, but basically here’s all it is–just put everything in a big pot, in the order it is listed in the ingredient list, stirring and resting a minute between each new step. So, it ended up being one of my easier and faster endeavors of recent memory.

Plus, even with the cheese and avocado garnish it is still very reasonable health-wise. I baked a couple extra tortilla chips to use in place of bread, and those suckers are tasty, too. The soup is fairly spicy, but it is easily adaptable. Add less chili powder or cayenne, or skip the jalapeno. On the other hand, you could add more of those things if you don’t think it’s spicy enough. It would go really great with some mixed greens and the spicy balsamic vinaigrette I wrote about the other day. It also is just as fantastic reheated the next day, so it is a great lunch option too. 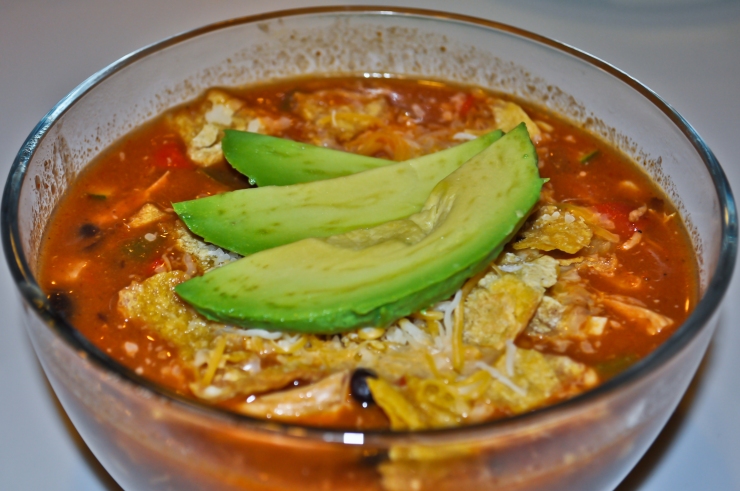 I am a little worried about how I will fare in the cold months ahead. Last year I ran away to my parents’ home in Texas, but they moved back here recently and now we are all without refuge! Thus, I am sure I will be on a constant mission to find warm, comforting foods that still meet all of my requirements for clean and healthy living. I will just have to hope they all turn out as successful as this one did!